Find People or Companies from Spain

Finding People in Spain:
Use the Searchbox above where Whitepages.es and Google.es provide you
with People Search results targeted on Spain.
Try all possibilites to find the person you are looking for. 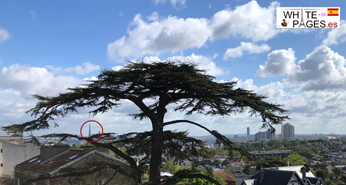 Get good energy from the Eiffel Tower
Instagram: #cedreimperialmeudon

All Hotels in Spain
Governments in Spain
Embassies of Spain

Search people by email address, find the person behind it ... in English ... small charges apply.

You receive an e-mail from an unknown person ? You want to find someone in your contact list that you no longer have the name ?

Whitepages came alive shortly after the 1876 invention of the phone by Alexander Graham Bell
They are edited by many different Telecommunication companies
often linked to a long and fascinating Post and Telephone History.
First printed on white paper they are now online.

Whitepages.com.au from Australia were the very first ones to get on the web in 1994
followed by Whitepages.co.nz from New Zealand.
Whitepages.fr from France were path setters for many other countries
starting with Whitepages.com.br for Brazil.

Information on Museums and Brands,
Crown Jewels of Spain.

For more information about Madrid, please check with the service: Phone Book of Madrid.com

For more information about Spain, please check with the service: Phone Book of Spain.com


About Cities of Spain